Regional Synod of Canada
14 “You are the light of the world. A city built on a hill cannot be hid. 15 People do
not light a lamp and put it under the bushel basket; rather, they put it on
the lampstand, and it gives light to all in the house.
16 In the same way, let your light shine before others, so that they may
see your good works and give glory to your Father in heaven.  Matthew 5:13-16


6 For God, who said, “Let light shine out of darkness,” has shone in our hearts
to give the light of the knowledge of the glory of God in the face of Jesus Christ. 2 Corinthians 4:6


The light of the knowledge of the glory of God is shining in the Classis of Ontario and beyond through the ministry of Vida Nova and the Classis Multiplication Team led by Gildo Vieira and Adrien Bausells.

Gildo shares with us the history and ministry of Vida-Nova, a Portuguese-speaking church in article below this one.

Here is a summary of the places that God has worked and is working to build His church during a time when many churches are struggling to survive. This is exciting and gives glory to God!

Light for the Nations is an organized church in Montreal which was planted by classis and Vida Nova. It has 200 in attendance in worship and is outgrowing its facilities. 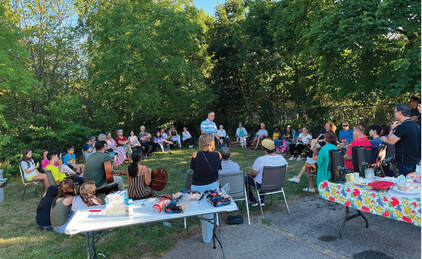 Other
Oxford Church in Ingersoll (English speaking) led by Pastor Meine Veldman
Korean church in Toronto is in final stages of approval.

Hundreds of people attend these church plants each week and the plan is that each church plant in time will also plant a new church.

The dream is also to plant church in other places in the RCA and in other countries.

The Ontario Team has also been tasked with the to work on the setup, structuring and strategy of a Leadership Centre.

Thanks be to God for the fruit of this labour.  The harvest is rich!
​

Portuguese Ministry in the Reformed Church in America

In 1997,  Pastor Elias Dantas and his family was called to plant the first Portuguese speaking church in Toronto.  A 5-year plan was set with the expectation to have the first service in 1 year.  Not knowing what the Lord had reserved for the ministry, two months after his arrival Pastor Elias celebrated the first meeting at Elder Gildo Vieira’s residence at with over 20 people attending.

Vida Nova was born with multiplication in its DNA, and after the departure of Pastor Elias, a transitioning Pastor was in place. Pastor Humberto Lopes brilliantly handled the transitioning period until the arrival of Pastor Ceny Tavares.

Upon his arrival in Toronto Pastor Ceny went straight to the church, where He entered in the sanctuary on his knees, declaring we will move forward from here according to God’s will.

Pastors Ceny and Humberto shared the vision to start a first daughter church in Mississauga. Today this is New Hope Reformed Church, a Portuguese and English ministry.

After Vida Nova acquired its own location on 2365 St Clair Ave in Toronto, Vida Nova was initiated two church plant initiatives in Spanish. Pastor Eddy Aleman, our current RCA General Secretary, was the planter for one of the churches.

Vida Nova has its footprint on missionary work for the last 21 years in Ghana, Brazil, Romania, and Niger.
Locally Vida Nova became mother church for many other initiatives such as: Light for the Nation in Montreal, New Hope in Mississauga, Comunidade Ponto Central in Edmonton, Joy in Hamilton, Palavra Viva in Halton.

Exactly 5 years ago Vida Nova gave birth to the First RCA church in Brazil with the name of Vida Nova Located on the state of Minas Gerais.

Today with two services and over 400 members, of which 120 are youth with their own service, Vida Nova continues to obey The Lord Jesus Christ and His command to: “Go and make disciples of all nations, Baptize them in the name of The Father, The Son and Holy spirit”